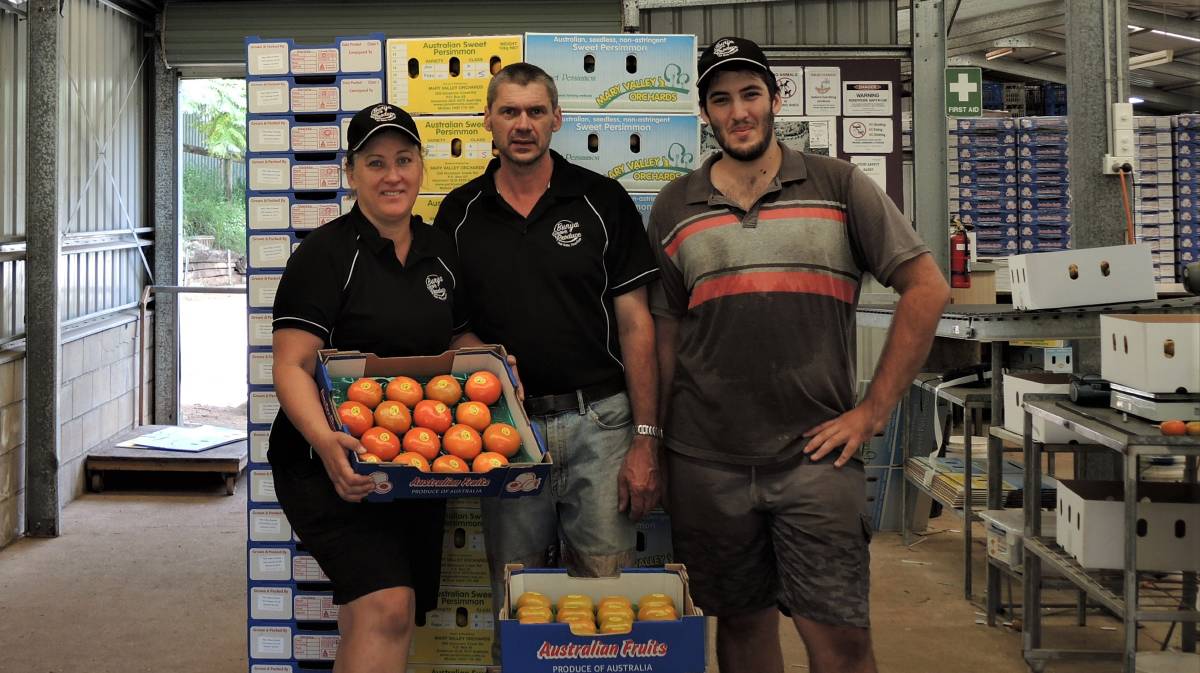 HEALTHY: Kylie, Mick and Patrick Carr showing off some of their persimmon output which has been helped by the Fruition system.

Lure and baiting system works a treat for these Qld persimmon growers.

THREE years ago, Mick and Kylie Carr purchased a persimmon orchard next to their grazing property Bunya Grove Produce near Gympie.

They were looking for more land to run their cattle.

The mature orchard had 11,000 trees on 16 hectares, a packing shed and a local workforce for harvest time.

It looked like a promising operation that would complement their grazing activities.

The Carrs turn the cattle onto the persimmon orchard when the harvest is over. The animals clear up fallen fruit, eat the weeds and manure the area.

But that first year was very disappointing. The new orchardists lost 30 per cent of their harvest to fruit fly.

"We probably lost 20 tonne of fruit. A 30pc loss was not sustainable," Mr Carr said.

"For each piece of fruit that we lose we calculate that we have lost one dollar. It's devastating when you pick a beautiful piece of fruit and turn it over and it's been stung.

"It was such a waste. We fed trailer loads of spoilt fruit to the pigs. Something had to change," she added.

The Fruition Trap is a specific shape and colour to attract Queensland fruit fly (Qfly) and comes with a unique lure invented by Professor Drew to attract sexually mature egg-laying female fruit flies.

It is the first lure in the world to attract sexually mature female fruit flies.

Traditionally fruit fly traps attract the males and Mr Carr has found these to be ineffective. The Fruition Trap and lure was commercialised by AgNova Technologies in 2016.

In their second year as orchardists, the Carrs introduced the Fruition Traps and lures with encouraging results.

"Over that season we probably lost around 10 or 15pc of the crop," Mr Carr said.

"This was a huge improvement on the previous year."

The Carrs used the blue Fruition Traps for the mature female Qfly and Natflav, a protein bait, to attract and kill the immature females and immature males.

The Natflav bait is coupled with an insecticide and sprayed onto the foliage weekly.

"The traps and the baiting program together made the difference. You need both," Mr Carr said.

The Natflav protein bait suited the Carrs who want to minimise chemical use.

"The protein attracts the flies down from the top of the tree, away from the fruit. It is not necessary to spray the fruiting part of the tree," Mr Carr said. 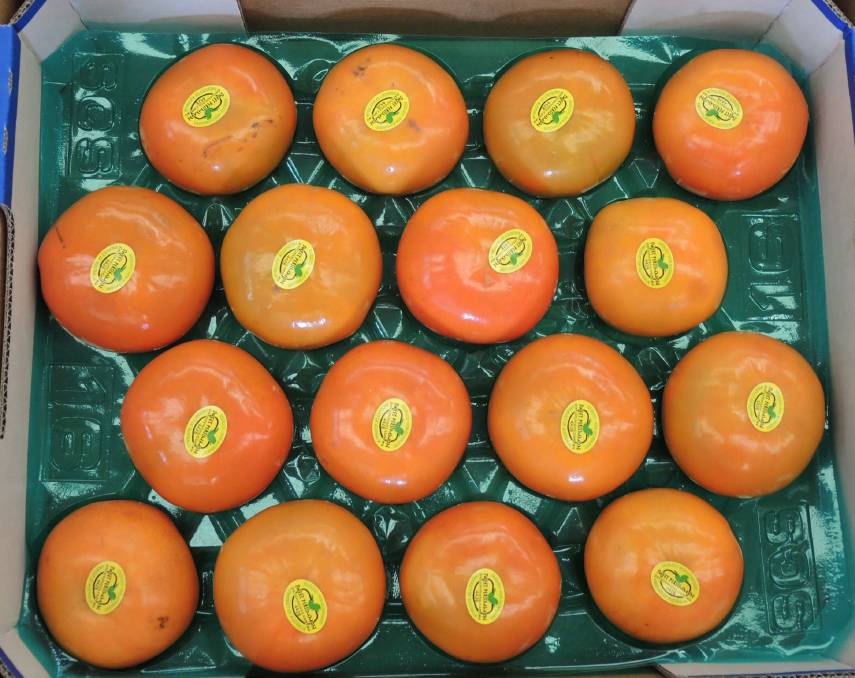 CLEAN: With the implementation of the Fruition system, the Carr family's persimmon crop is now cleaner and holds more market appeal.

Late in their 2018 season, the Carrs also found the cucumber fruit fly Bactrocera cucumis in the orchard.

To combat this, they worked closely with Professor Drew and AgNova and trialled yellow Fruition Nova Traps.

By the end of the season, the combination of blue Fruition Traps, yellow Fruition Nova Traps and the Natflav baiting program reduced their fruit loss substantially.

In 2019, the Carrs made some adjustments. They were more rigorous with the Natflav spraying and placed an even mix of Fruition Traps and Fruition Nova Traps through the orchard. Rainfall was low so fruit set was down.

"The Fruition system has been our saving grace this year," Mr Carr said.

"Even though the fruit set was low, it's been a reasonable year because we haven't had the fruit losses. In total we lost less than 5pc."

An independent survey of wild guava fruit growing on the Carr's property by Professor Drew in early April found that 62pc of the fruit were infested with QFF, confirming that QFF were active in the orchard and environs at the time that the persimmon crop was ripening and being harvested.

The fact that less than 5pc of their persimmons were infested, in areas next to the infested guavas, is a testament to the value of Fruition Nova Traps used in an IPM program with Fruition Natflav protein baiting.

"It's been great. The girls in the packing shed are saying, 'there's no fruit fly'. So they are noticing it. They do not have to make constant decisions. The whole packaging process has sped up. It's heaps better," Ms Carr said.

This year, the persimmons have gone to markets in Sydney, Brisbane and Melbourne where they fetch a good price.

There have also been enquiries from Singapore and Malaysia.

The Carrs said they have been well supported by Professor Drew and the AgNova team.

The orchardists will keep using the AgNova products in 2020. With some fine-tuning and good rainfall, they hope for an even better harvest.

Ms Carr's advice to other farmers was to look at their current program and certainly look into the Fruition program.

"It has been very successful for us," she said.