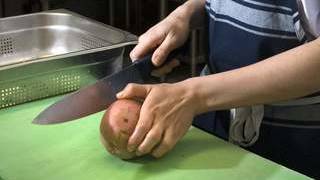 Emotional attachment in cooking could be the key to selling more fruit and vegetables.

THERE'S a secret ingredient in every dish that is conjured up during television cooking shows.

You can't bottle it, though some have tried.

The secret ingredient is: emotion.

Most celebrity chefs nowadays are as adept at lacing their cooking with it as they are at getting stiff peaks for their meringue.

In the days of Peter Russell-Clarke and Bernard King, then later Iain Hewitson, Geoff Jansz and Gabriel Gate (the eighties and nineties were apparently not a good time for female celebrity chefs), the food was the focus.

A few gags were thrown in as a recipe came together but there was plenty of information about the ingredients going into the pan/dish/bowl/oven/wok.

The likes of My Kitchen Rules and Masterchef changed all that. It became as much about the drama of relationships between cooks and their ingredients, as it did about getting the avocado mousse right.

It's a bold move then for Hort Innovation to back a cooking program shown at 3.30pm on commercial television.

The RDC has sponsored My Market Kitchen, a Network Ten program featuring cooks whipping up dishes at various locations. With Hort Innovation's involvement, the show is also highlighting various growers and how they produce what they do, with on-farm visits and plenty of slick drone footage of orchards and fields.

So will it work?

According to Hort Innovation chief executive officer, Matt Brand: "It's about connecting people with growers and the fresh produce that ends up on their plate, to enhance both physical and mental health."

And there is the cleverness of the plan.

There's the secret ingredient, emotion, albeit dressed in a slightly different way.

Mental and physical health are intrinsically linked to people's emotions so appealing to that, modernises the concept of just another cooking show.

They want to know how something is grown, how to use it, what it tastes like, and increasingly, how it will make them feel.

It goes hand-in-hand with another Hort Innovation project, the Good Mood Food campaign, encouraging people to boost their mood as well as promote good physical health.

Showing someone with personality chucking salad onto a plate and a seared piece of salmon doesn't cut it anymore.

Participants need to be invested in the dish, whether that's through the struggle to get it prepared and the anguish it caused (ie. Masterchef, My Kitchen Rules) or how that dish will pick them up emotionally.

Perhaps the best way to make the most of the industry investment is to actually watch the show, tell a friend, and feel good about the food.