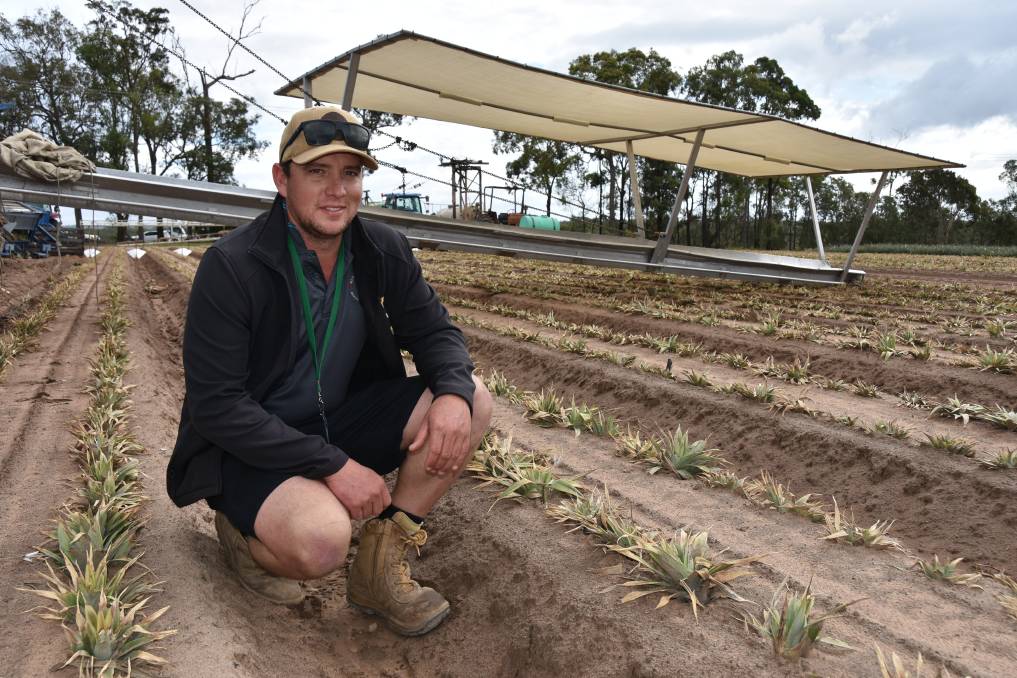 AUSTRALIANS continue to love their pineapple and that's holding the industry in good stead according to Sam Pike.

Mr Pike took up the reins as the new chairman of Australian Pineapples at the Pineapple Field Days in Bundaberg last month.

The Pike family has a long-established history within the pineapple industry with Mr Pike's father, Murray Pike serving as a director of Tropical Pines.

He took over the chairman role from Stephen Pace who did a nine year stint with the title.

"Hopefully I can live up to the standard of Stephen Pace. He's done an excellent job over the past nine years," Mr Pike said.

While the effects from COVID restrictions have impacted on many parts of agriculture, it has provided something of a renewed interest in the "king of fruit" for Aussies despite the threat of overseas products.

"Imports are a concern, for any industry in Australia. We are not overly worried as yet because you've still got to get into the country and of course the consumer has still got to buy it," Mr Pike said.

"One thing we have learnt since COVID is that people are liking buying Australian products so I guess that's on our side a bit but we are always keeping a very good eye on it.

"We are a little bit concerned but I think we can manage it.

"Production keeps going up and demand keeps going up so I'm guessing they are liking what we are doing. As long as they keep on buying it'll keep us happy."

According to the 2019/20 Australian Horticulture Statistics Handbook, 36 per cent of pineapples grown in Australia in 2020 were sent to be processed, with the majority of this volume either canned or juiced.

"The wholesale value of the fresh supply was $48.2m, with $42.5m distributed into retail and $5.7m into food service.

Forty per cent of Australian households purchased fresh pineapples, buying an average of 1.5kg per shopping trip. The supply per capita was 1.6kg, based on the volume supplied

The vast majority of Australia's pineapples are grown in Queensland which presents another pressure point for growers: the health of the Great Barrier Reef.

HEALTH: With the majority of Australian pineapples grown in Queensland, there is pressure on the industry to ensure minimal farm run-off which could impact the Great Barrier Reef.

Mr Pike said there was a heightened focus on waterway health and preventing nutrient run-off within the industry, with the issue being a key theme at the recent field days.

He said there was a lot of innovation coming through that's never been seen before in the industry.

"We are not usually getting this stuff (water quality issues) but due to the region (Bundaberg), there is a lot of pressure with the reef and whatnot. We are starting to see some really promising stuff," Mr Pike said.

"It's all about minimising your pesticide and herbicide runoff so we are going to try a few things on that."

The industry's efforts to improve on this front were also visible at the field days with Yandarin growers John and Linda Steemson, Littabella Pines, awarded their Reef Certification gained through Hort360.

They are the first pineapple growers to have their farm practices certified as consistent with improving water quality in Great Barrier Reef catchments.

PINEAPPLE growers are generally reporting a positive season thanks to better rainfall this year.

Mr Pike said his region suffered a rough start coming off the back of multiple years of drought but Spring was looking good at this point.

As a two-year crop, the soil moisture profile is critical.

"What happens today is going to affect what happens in two years time," Mr Pike said.

Sandy Creek Pineapples is currently in planting season and harvesting small patches. This will increase in August and continue through until Christmas.

That will require labour but it's not something Mr Pike is losing a lot of sleep over.

"It's been difficult for everyone; I don't think it matters what industry you are in at the moment," he said.

"Personally, for me it's not been too bad. I'm lucky enough that I'm close enough to the Sunshine Coast that I've got the ability to get local workers, Australian workers.

"I've been trying some backpackers but it's difficult. There is just not enough here at the moment and that's due to the circumstances we are in at the moment.

"I'm sure when things open back up again it will go back to the way it was and it will be yesterday's news, hopefully."

Mr Pike said the Pineapple Field Days were well attended, with many taking the chance to connect again having not been able to meet up last year.

"We often talk to each other on the phone day-in, week-out but we can finally get together and catch up. It's a bit of a showcase for us, as we can showcase the industry," Mr Pike said.